Cystic fibrosis can produce many symptoms and clinical signs. Some are very much more common than others. This chapter describes the commonest presentations and some less common ones. A practical approach to its diagnosis in the South African setting is then set out.

It is important that CF is thought of in many clinical situations. The diagnosis requires special testing once the clinical symptoms and signs have led to CF being considered.

In 15% to 20% of newborn CF infants, the bowel is blocked by sticky secretions. There are signs of intestinal obstruction antenatally on ultrasound, and soon after
birth with bilious vomiting, abdominal distension and delay in passing meconium. The obstruction can often be relieved by Gastrografin® enemas, but some infants
require surgery. The outlook for these infants is good as a result of the impressive improvements in neonatal surgery, anaesthesia and nutritional support.

About 85% of CF individuals have malabsorption and in most cases this is evident in infancy. The main cause is severe deficiency of pancreatic enzymes and
bicarbonate, although there is also evidence that the transport of some substances across the wall of the intestine is abnormal. These infants present with poor growth, failure to thrive and/or loose stools or steatorrhoea (offensive, fatty stools).

Virtually all CF patients have chest infections or wheezing, usually from an early age. The viscid mucus in the airways is particularly prone to bacterial infections,
which, once established, are difficult to eradicate. Children with CF often have recurrent or chronic lower respiratory tract infections. Symptoms include persistent
coughing that is often productive of sputum, and wheezing. All three features may be present ('classical cystic fibrosis') but in a South African review, this was in a minority of cases.

The commonest presentations involve the chest and the digestive system. It is important to note that many people with CF do not have growth problems at the time of diagnosis. Normal growth does not exclude CF.

Making the diagnosis of Cystic Fibrosis

Typical CF probable (clinical presentations marked with * above) – i.e. a high chance of CF being the cause; few other causes are likely to explain the
symptoms; not to prove the diagnosis would be very likely to do the patient harm.

Typical CF possible (clinical presentations marked with § above) – i.e. CF is but one of a set of possibilities in the differential diagnosis; it would be helpful to exclude it from the list if it were simple to do so.

Atypical CF possible (clinical presentations marked with ¥ above) – there are symptoms that might be explained by another disease but do occur sometimes in CF, especially in late onset or late-presenting CF.

Which test to use

1. The sweat test (either electrolyte estimation or conductivity) remains the most important and frequently used clinical test for the diagnosis of the classical form of the condition.

Sweat Conductivity tests are more readily available but not as reliable as sweat electrolyte testing. Positive range for conductivity is 90 and above - refer. Levels between 50 and 89 (borderline/grey zone) should be discussed with a specialist in CF. Level <49 - negative

Sweat electrolyte testing:
Positive range for chloride of above 60mmol/l; Levels of 30-60mmol/l should be considered to be grey zone/borderline and should be discussed with a specialist in CF . The sweat chloride chloride level is almost always higher than sweat sodium in CF. Level <30 – negative.

2. Where sweat testing not available, the faecal pancreatic elastase-1 test can be used to demonstrate pancreatic insufficiency (PI). A level less than 100 mol/l indicates severe PI; levels from 100-200 mol/l indicate moderate PI. See diagrams below for when to use this test.)

3. Testing for CF-related gene mutations on a blood specimen can be helpful. When to use this test is shown in the diagrams below.

The Diagnostic Algorithms below indicate how to use these tests and the services available in South Africa to assist in making or excluding the diagnosis of CF depending on clinical presentation and availability of these diagnostic tests.

Approach to testing for cystic fibrosis where sweat testing is available 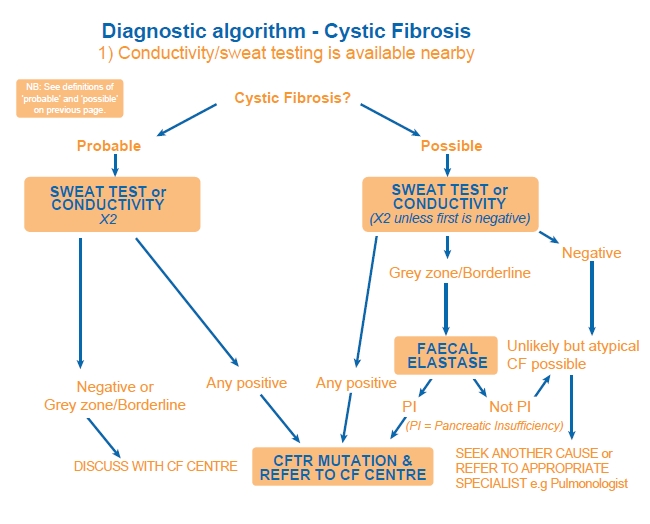 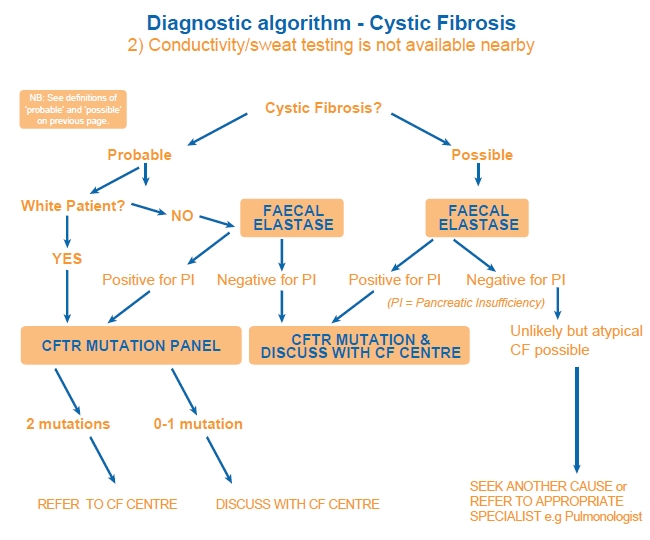 Two positive sweat tests (performed by laboratory personnel experienced in the technique) should be done before a definitive diagnosis of CF is given. If the patient does not have two recognised CFTR mutations, a third sweat test should be performed a year or so later, NO MATTER HOW CERTAIN THE DIAGNOSIS MAY APPEAR.

It is advised that all CF patients have their blood examined to identify their CFcausing mutations. The regional CF Centre should be contacted for advice. Mistakes in diagnosis do occur. Both over-and under-diagnosis are possible and repeat testing is often required.