Cystic fibrosis (CF) is a multi-system disease. Its related bone disease (CFRBD) is manifested clinically with:
CFRBD is more likely in patients with:

Late childhood and adolescence are critical periods when bone accrual during skeletal formative period is most rapid. It is essential that an attempt be made to prevent CFRBD and, failing this, that it is recognised early and treated appropriately. The causes of low bone density in CF are shown below. 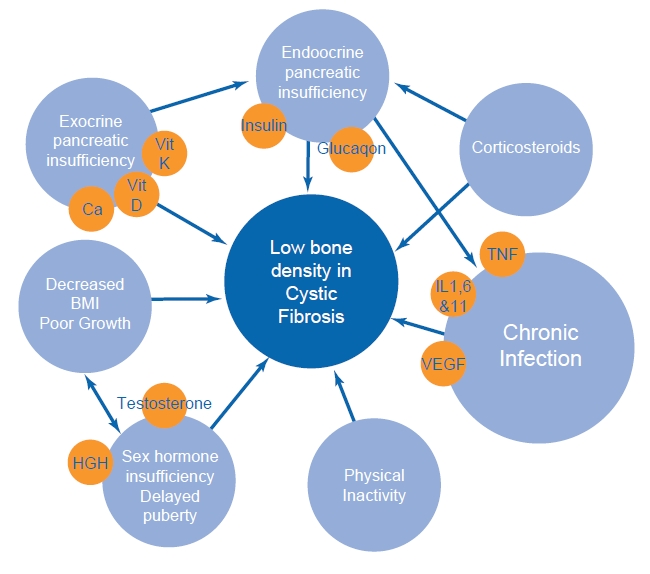 Early recognition of reduced bone density
Reduced bone density should be measured by using Dual energy X-ray absorptiometry (DxA scan). This should commence in CF patients from the age of 16 years or as early as 8 years in children who have <90% ideal body weight, FEV1 <50% of predicted, glucocorticosteroid use of ≥ 5mg/day for ≥ 90 days / year, who have delayed puberty, a history of pathological fractures or who have been transplanted or are being assessed for transplantation.
Interpretation of the DxA scan
The DxA scan should be interpreted with care in children or young adults whose growth plates have not fused. The DxA scan must be corrected for delayed skeletal maturation by assessing bone age before interpreting the DxA scan. Z-score are used when growth plates have not yet fused and thereafter T scores are referred to.
In CF, unlike in post-menopausal women:
Management of bone mineral density abnormalities
The diagram below shows the treatment recommended according to severity of bone disease. 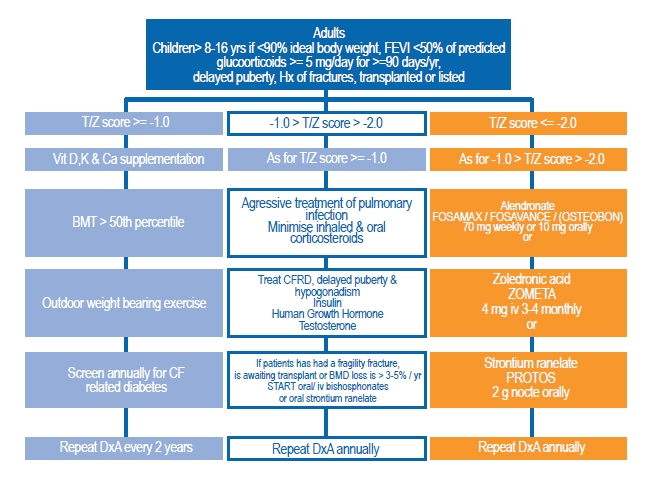 Cystic Fibrosis Associated Arthritis (CFAA) and Hypertrophic Pulmonary Osteoarthropathy (HPOA) in CF are relatively common, have similar presentations but require different management.
Cystic Fibrosis Associated Arthritis (CFAA)
This commonly presents with pain in the large joints like the knee, ankle, shoulder, elbow and wrist. The pain is episodic and usually last for less than a week. The
arthritis is non erosive, onset of pain is sudden and can often be disabling and can have an associated fever and skin rash. It can be associated with an acute pulmonary exacerbation and associated hyperactive immune response. There are no X-ray changes. CFAA is not more common in patients with severe lung  disease.
Hypertrophic Pulmonary Osteoarthropathy (HPOA)
HPOA presents with symmetrical joint pain usually involving the knees, ankles and wrists. Onset is more insidious, pain is initially mild and the joint is swollen, tender and warm often resembling cellulites. X-ray of the involved joint may show periosteal elevation with new bone formation along long bones. A radio nucleotide bone scan shows diffuse, intense and symmetrical uptake. HPOA is more common in patients with severe lung disease. Treatment – see diagram below.